We’ve had an incredible week here in The Outer Banks. Because social media can paint a picture, I find it very important to keep it real. I guess I felt led tonight to share some of the “behind the scenes” and real photos so no one thinks our vacations are all hearts and stars. Just as we are not perfect, our annual vacations have their share of issues, disasters and troubles. So let’s take a look at a few….(and it’s only Thursday).

In a “if you give a moose a muffin” moment, I figured while I was replacing that wiper, I might as well #BeBrave and replace the air filter in the engine and one in the cabin. After stripping most of the screws on the filter cover, I was able to remove them by using a socket set (stay with me here, this will come into play later). Because I’m such a handyman, I replaced both the filters and was feeling pretty good about myself. Also, because I’m so smart, I made sure those bolts were really tight so there was a good seal (Again, stay with me….).

Somewhere around West Virginia, the little engine light in the van came on. Brilliant. My wife quickly pulled the book out of the glove compartment to decipher if this meant the van would explode somewhere in West Virginia or if we could make it to, oh, say, Virginia. As she read that the problem was an “emissions system” problem, that really smart guy behind the wheel (me) started to feel not so bright after all. I’m not 100% sure, but chances are pretty good those filters are not installed properly – thus giving the emissions problems. When we stopped for gas, I figured I would give everything a quick look, but, if you stayed with me thus far, the screws are stripped so I couldn’t get them loose. No, I didn’t bring a socket set. We made it to OBX, but that light is still on (more on or moron this later).

Once we arrived in OBX, we realized that we ordered sheets for the beds but forgot to get towels too. We’ve been drying off after showers with our beach towels all week. Don’t judge us.

But since I’m keeping it real, I bet none of you knew that this happened while I was practicing my dance moves –

Let’s just say I didn’t quite stick the landing.

Nor did I stick the toppings on our pizza our first night here. Brand new oven. Brand new pizza. Same coordination of  a carp.

Some of you might have seen this incredible sunset we captured last night. It was breathtaking –

What you didn’t see was that our battery was dead when we got ready to go out that night. That little button on the dash of the Honda vans that controls all of the internal lights? Yep, somehow it found it’s way to “On” just like the lights in the van….all night. So before the sunsets, there was this… (Note: If you look close enough, you can see the stripped screws from yours truly). 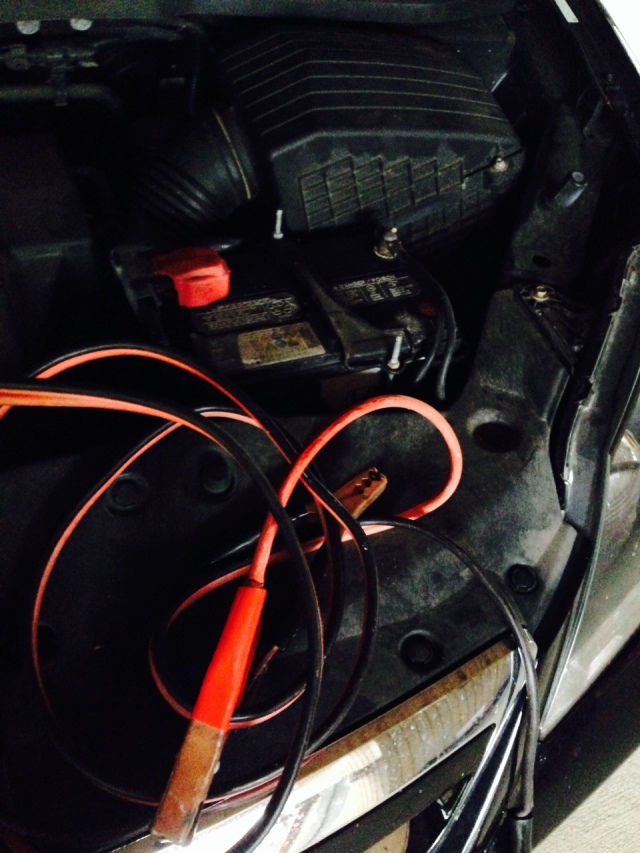 Speaking of those stripped screws, I was really smart and got a tool to remove that filter cover and “fix” it.

Unfortunately, the guy that put that cover back on when he installed the filter, put them on so tight (told you to stay with me) that I can’t get enough torque to get them loose with this tool. Awesome.

That pond by our house? It looks awesome with rain drops (see our weather wasn’t perfect all week). The turtles that come up on shore and greet us in the morning? Despite our best efforts to NOT catch them while we were fishing, well, we did. Not good. Not good at all. He’s alive, but he’s not happy and I still feel guilty.

These are but a few of the adventures that social media doesn’t quite capture. But you know what, they’ve made every bit of the story of this trip that much richer. We’ll have laughs to share when we get back and for years to come.

The windshield can be fixed.

The engine will get us home.

I fell on my face but I got up and somehow my wife captured the moment I shared with Princess 1.0.

Dead battery? We met our neighbor by asking him to give us a jump (my wife’s idea).

I guess I have 2 points as I sit here reflecting on the week we’ve had so far:

1. This is all just a reminder that we can’t allow social media photos and posts to drive who we are. They never tell the whole story. Hopefully you’re getting a glimpse of that here.

2. The stuff that doesn’t make the cut, the outtakes if you will, are the things that write the story of the journey. It’s the not-so-perfect moments that you laugh and remember.

Thanks to those that have followed along this week and shared the ride.

Aaron Conrad is a participant in the Amazon Services LLC Associates Program, an affiliate advertising program designed to provide a means for sites to earn advertising fees by advertising and linking to  amazon.com.